When I was asked to write a piece for woman’s day, I found the thought quite intimidating.  What would I write about?  What could I possibly offer that would be worth reading about?  Obviously because it was my #bestie, Wenchy that asked – I couldn’t say no.  So here I sit pondering on my life gone by, trying to decipher the best advice or even the best recollection that I may pass on to other women.

I think that the hardest part about being a woman in today’s life, is to actually be a woman.  Most of us grew up in a time where it was prime choice to have a boy.  Unfortunately for me (and my two sisters), we were born female.  This turned out to be our greatest crime in the eyes of our father.  No matter how hard we tried to get out of that stereotype, it stuck.  Granted we learnt to do a lot of things that other women generally cannot do – like service a car, change a tap washer, tile a bathroom, paint a house etc.  While this took up our weekends, our mother fervently tried to embrace the feminine side of us – teaching us to cook, bake, and sew and other such suitable activities.

So many of my parents’ quirks have moulded me into the woman that I am today.  That combined with a 20+ year marriage.  As a young child and growing up into adulthood, we were melded into the role of prisoner / house help / gardener / and anything else that might have been needed.  The absolute terror of my father coming home, lest anything be out of place or our school results not good enough.  We were brought up in a house where children were not seen and most definitely not heard. We were not allowed to have friends over and it was very rarely that we were allowed to go to a friend’s house. It was a different upbringing, one that required survival skills sometimes tantamount to Special Forces. The three of us learnt the art of karate – after all we needed some sort of defence mechanism against the father; the drunk, abusive father.

In my matric year, I met my soon to be husband.  Also a difficult man, but certainly better than the other option of staying at home.  The day I got my matric results, I was told to leave.  This after many bitter arguments on the subject of tertiary education.  So at the tender age of 17, with only my clothes, I stepped into the wide world of adulthood and moved in with my husband.  I am sure that I might have loved him, but I loved the idea of “freedom” more.  How wrong I was!  As the years passed, we had three daughters.  I had started studying in a highly specialised career and he plodded along to his own routine.  This routine unfortunately did include much work, and the burden lay at my feet to ensure that the children had a place to stay, had food to eat and all their other needs were seen to.

As the years passed by, he became more withdrawn and more difficult – becoming more and more like my father.  I was torn between wanting to leave and having a stable, two parent home for the girls.  I was caught in the cycle of keeping my mouth shut and doing what was necessary for everything to run smoothly.  Irrespective of the snide and biting comments, or the lack of income from his side, I did what was necessary to keep it all going. 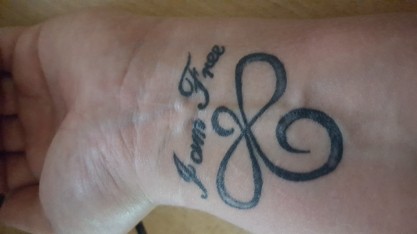 I can’t exactly say what snapped in me, but something did.  On a balmy night in November I had enough of his threats and accusations.  I marched over to him and told him in no uncertain terms, that I was done with this relationship.  I just couldn’t carry on the way things had been going for so long.  (Things had become worse after his nervous breakdown and suicide attempt.)  I can’t say for certain what actually triggered this event.  After all, things had been like this for so long already.  Once again, I was at the point of not going out anywhere, not having friends and living a totally secluded life.  I was even being checked up on at work (just to ensure that I was actually at work and not some other devious place.)

After the brave act of telling him that I was done, things became unbearable.  Between the threats and accusations, we literally fled with our clothes and our beds.  It has been just over a year now and slowly but surely I have been working through issues that imprisoned me all these years.  I still have a long way to go, but each day I am learning to be free – to be me.  Actually, I am learning to be me and learning who me is.  I have had such a different life up to now, that the most normal of behaviours in others absolutely floor me.  The differences have culminated in some really interesting OCD traits and a lot of naivety.  The best thing that I have done for myself – is to escape the male dominance and to live for me, to the betterment of me.

Every woman deserves this freedom.  The freedom to be completely herself, unashamedly.  So for now, I have this constant reminder to never get into that position again.

Subject choice is up to the writer and I trust you will enjoy this introduction to the special females on my various platforms. If you want to be part of this series, mail me: wenchy@mweb.co.za